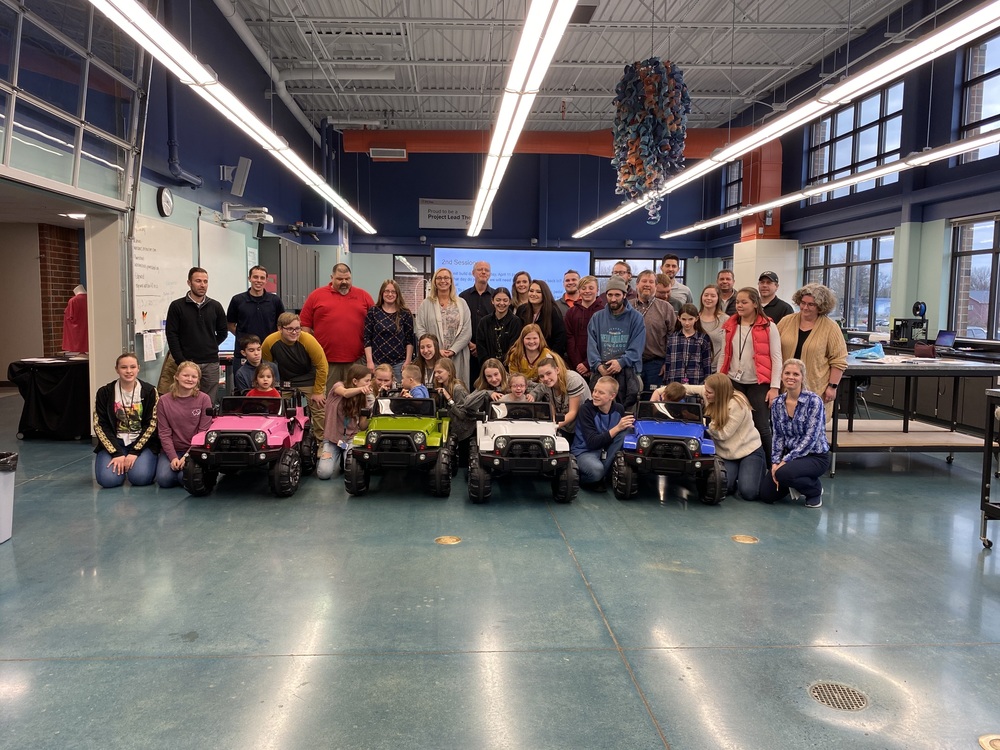 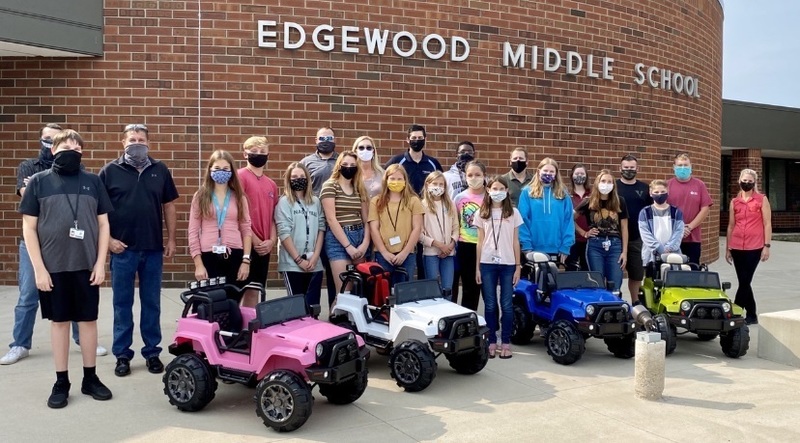 This is a heartwarming story of kindness, generosity, and dedication. When life changed for us all in March 2020, Abbi Richcreek , PLTW Teacher at Edgewood Middle School, was determined to not let anything derail the dream she had for four precious children. The first photo was taken in March in Abbi's classroom before anyone knew what was going to happen on Friday the 13th. The second photo, six months later, shows volunteers from our community with Edgewood students now set up to complete the project over the coming weeks in their "outdoor classroom" with mobile tool carts. 'Whatever it takes' has been the motto that drives people with a passion like Abbi Richcreek.

Congratulations to Mrs. Richcreek, PLTW teacher at Edgewood Middle School, on another successful launch of a school-community partnership for GoBabyGo! Mrs. Richcreek promotes STEM education through her classroom curriculum, after school clubs, and special projects such as GoBabyGo! This is a continuation of the second set of Jeeps to be modified for GoBabyGo! at Edgewood due to the physical closing of Warsaw Community Schools in March. This year's project will focus on finishing vehicles for four deserving children whose projects were put on hold.

Key contributors continue to fund this program and understand the importance of delivering on the promises made to the four deserving children in March. Thanks go to Warsaw's VFW 1126, the Korreck Family, and Kosciusko Endowment Youth Services (KEYS) for a grant through Kosciusko Community Foundation.

Mrs. Richcreek reached out to let the four beneficiaries know that teams of engineers and volunteers will prioritize this project even if the children cannot physically be at the work sessions. Emmit, Zorey, Jordynn, and Bryar will each receive a customized and modified 12-volt vehicle. With this mobility gift, these children will have increased independent movement experiences that allow expression, play, socialization, and exploration for learning. Mrs. Richcreek again recruited over twenty Edgewood students who have committed to a five-week after school STEM activity to be held outside following Covid-19 health and safety protocols. Abbi Richcreek is grateful that volunteers from last year's program returned to complete their projects. Students who graduated from Edgewood Middle School and went on to WCHS also came back.

Emmit, Zorey, Jordynn, and Bryar will each have a team of Edgewood students consulting with mentors to work through a design process to meet the objective of engineering a vehicle that meets the unique needs of their child client. Mentoring engineers from local companies were on-site on Wednesday, September 16 when this year's GoBabyGo! launched again. Abbi Richcreek also arranged to have Physical Therapist Dr. Aaron Turner on-site to answer questions about mobility so Edgewood students can make assessments and engineer alterations to create a specialized vehicle.

Mrs. Richcreek would like to thank all who support GoBabyGo! She appreciates the ongoing partnerships with volunteers from Warsaw Community Schools Maintenance Department, Depuy, Zimmer-Biomet, Dalton Foundry, and Paragon Medical who serve as mentors and give their time and talents to enrich the lives of others. Mrs. Richcreek believes that together, Edgewood students and STEM mentors can make a lasting difference in the lives of Emmit, Zorey, Jordynn, Bryar, and their families. Warsaw Community Schools thanks Abbi Richcreek, donors, and volunteers for their ongoing efforts to complete this community partnership project and deliver an amazing gift to four grateful families.